I’m the kind of person who knows a little about a lot. Given the title and theme of this blog, I trust that’s not a surprise.

That I would become such a person was a foregone conclusion. For some reason I don’t exactly understand, I have an exceptionally easy time taking in information, remembering it and — crucially — recalling it. That much is obvious and has been obvious to me and apparently to everyone around me ever since my first year at school; I got a reputation.

I’ve read pop-science and other nonfiction since childhood, never concentrating but moving on to a new field as soon as the books started to repeat themselves. As a result I’m good at quizzes and can babble semicompetently on many topics. At 13 I tried to memorize all world capitals to see if I could (I could), and at 22 I made some money appearing on Jeopardy.

A wide-ranging knowledge base is easy to acquire if you’ve got the right kind of sponge for a mind; just making a little effort to study something means you’ll know more about it than the vast majority does. You’ll have information on offer to anyone who asks for it (and some who don’t). You throw out tidbits here and there, explain things when appropriate (and sometimes when it’s not), and generally act as a vector for the dissemination of bite-to-chunk sized bits of knowledge. This makes you used to being right and having the answers. You learn to trust yourself.

Here lies danger. Being this kind of person sure as hell makes you feel knowledgeable. People will also see you as knowledgeable when you can answer most basic questions and explain many concepts — it’s just not obvious, to others or to yourself, exactly how shallow your knowledge is.

If you’re not careful, getting used to occupying the role of The Knowledgeable Person will make you feel like you’re not just an amateur but someone who can speak with authority even in the presence of real experts. You’ll think the knowledge you’ve aquired puts you on par with them.

There is also another reason. It’s much easier to “climb in rank” wrt knowledge (or skill) when you start learning. This is because the distribution of knowledge is so skewed it gives us a false impression of how far we’ve come on the way to mastery.

Here is the knowledge distribution on a given topic: 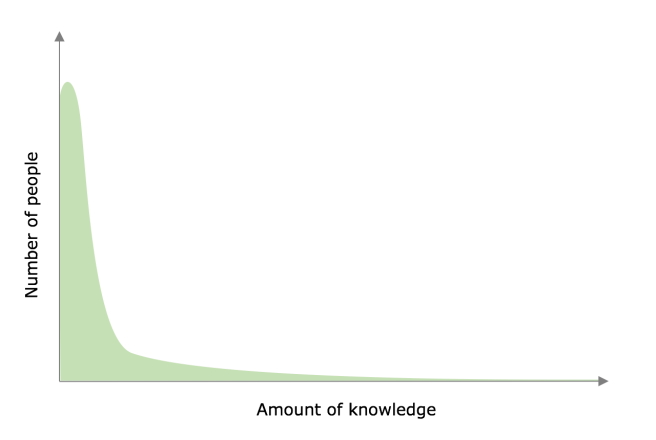 It can be the politics of ancient Rome, quantum mechanics, gender theory, organic chemistry, art history, macroeconomics, astronomy or the Thirty Years War. Many know virtually nothing, more know just a tiny bit, and as you move towards greater expertise the amount of people possessing that much becomes vanishingly small. Researchers at the forefront of knowledge have but a handful of peers in the entire world.

With this sort of structure you only need to cover a short distance to go from normal level to being in the top 5% (or even top 1%) of people. You’ll have come 95% of the way but with another 95% left, a consequence of taking “moving up in rank” for an accurate measure of “moving up in absolute knowledge”. At Dilettante Point it feels like you’ve come most of the way Expert Land[1]. 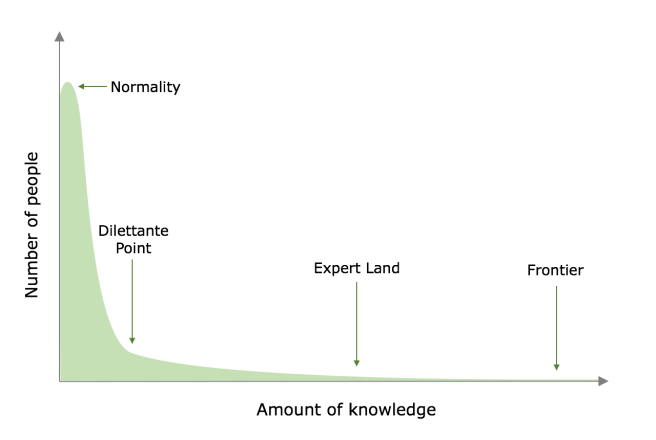 On the few topics where I think I’ve managed to press on a bit past Dilettante Point, I’ve realized how simplified, partial and vulgar my earlier understanding was. It’s a strange process to experience — you’re happy you’re learning more and understanding things better, but also present is a sinking feeling resulting from the realization that what you’ve trusted before wasn’t always worth that trust.

It makes you doubt everything you think you know. It also makes you think — in fits of former-self-loathing — of everyone who weighs in on a topic with less knowledge than yourself as an embarassing rube.

The obvious and unsettling conclusion is that, to some, I’m the embarassing rube.

As I’ve become more aware of this I’ve acquired an inner voice constantly telling me I might be standing on Mount Stupid[3] making a fool of myself. To placate that voice I’ve developed a set of verbal disclaimers and ritualistic humility-displaying habits to help me avoid responsibility for what I say and to avoid betting more than I can handle someone calling.

These are phrases like “I don’t really know, but…”, “As far as I understand it…”, “I barely know anything about [thing], but what I’ve heard is…”, that let me opine in good conscience. I’m thankful for them, and for other little hedgings like “I think”, “I suspect”, “probably”, “maybe”, “could be”, “I’d say”, “tend to”, “sometimes” and “in my view”. Without them this blog might not exist[4].

[2]
While multi-dilettanteism can be rewarding it’s not that useful in the real world. You won’t know enough to make a meaningful contribution to a field of knowledge, and professional life tends to reward depth and focus over breadth. One way to try to put your array of shallow, disparate knowledge to productive use is to make lack of specialty a specialty in itself. You go abstract, you compare and contrast, you make associations that cut across normal lines and bring together the unexpected. You nurture a special interest in understanding how different fields, ideas, perpectives and paradigms are different and how they are the same; what’s aligned, what’s in conflict and what passes through each other as if nothing is there; how it all hangs together, and perhaps more importantly, how it doesn’t.

[3]
I don’t think Dilettante Point is the same as Mount Stupid. Mount Stupid level knowledge is stuff you heard third or fourth hand, not stuff you read and sort of absorbed in books by actual experts. I’d say Mount Stupid is more likely located at the right half of the main peak.

4 thoughts on “Dangers at Dilettante Point”